Knot A Boat Booth at the Seattle Boat Show 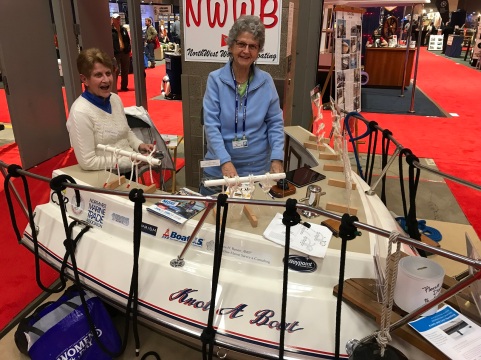 What is Knot  A Boat?

It is a 8’ BY 8’ bow of a fiberglass boat outfitted as a knot-tying station. It offers a 3 dimensional  opportunity to learn and practice tying the many knots that we as boaters need to or should use to make our boating lives safer and easier but which we are often out of practice with or have never learned.

Where did the idea for Knot A Boat come from?

Where did Knot A Boat come from?

It came from ‘the depths of the Puget Sound’. Yep, creative Vivian asked herself, “Where can we get a boat and someone to cut the end off for us? It turned out that the Derelict Vessel Removal Program were the perfect source. These are the folks who drag up derelict, sunken boats from the depths and gather other abandoned boats from around the Sound. They were so thrilled that someone actually wanted to take one of the boats off their hands, or at least part of one, that they did the actual cutting off of the bow to Vivian’s specifications.

How did it go from derelict to ship-shape?

Through the kind willingness of numerous maritime businesses and folks around Seattle, Knot A Boat emerged as the attractive teaching station that it is today. It was a community endeavor embraced by all. Here is a list of all those who did work and hardware to make Knot A Boat possible:

Joe Cruikshank – Framing for under Knot A Boat

How did Knot A Boat become a feature at the Seattle Boat Show?

Knot tying is an element of safety onboard that is often overlooked by boaters. From the beginning, the Northwest Marine Trade Association embraced Knot A Boat as a unique feature at the Seattle Boat Show. The Booth is non-commercial and fun for those volunteering and the boat show attendees stopping by. They can relax, engage in conversation and practice the actual tying of all kinds of knots, using the instructional boards or the expertise of volunteers at times. It is an interesting way to promote a feature of safety on board.

What did Knot A Boat offer to Northwest Women in Boating?

Boating has long been seen as a predominantly male dominated actively. There are, though, so many talented women doing amazing things on the water. There are so many women eager to become more knowledgeable and in charge out on the water. There are many women wanting to take a more active role in the boat they own with a partner.  Women who embrace Northwest Women in Boating are proactive about improving and even sharing their boating skills. Knot A Boat gave women an effective teaching tool to improve their skills. Very importantly, though it offered an opportunity to put women ‘out front’ as actively involved with promoting and teaching boating skills and safety on board. Knot A Boat, in a way, became a visible statement to other women and the larger boating community of women taking charge and saying, “We are capable of learning and master the skills of boating.”

What is the Future of Knot A Boat

Vivian had taken over the role of caretaker of Knot A Boat but it needed a permanent home. With the help of others, it was donated to the Seattle Maritime Academy where it resides proudly in their lobby where and is used for interactive outreach with visitors. Northwest Women in Boating is still able to feature it at the Seattle Boat Show.